We're not the Only Harvesters 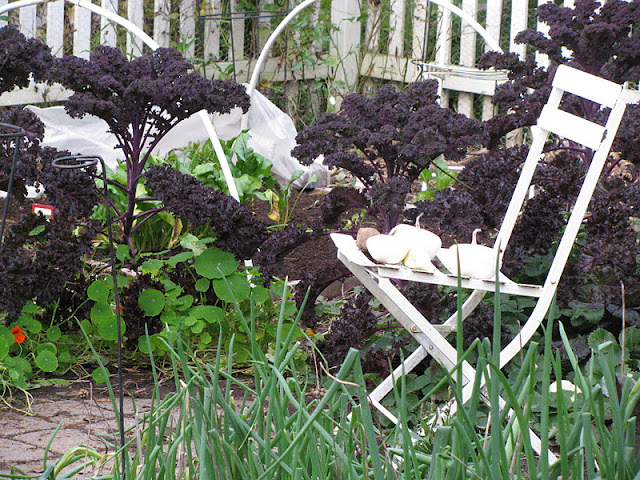 The Ornamental Kale blasts black against the white pickets and garden hoops. I'm really pleased with how it's performed and although sold as ornamental, this Kale is fine to eat, just not as tasty as some others out there. The nasturtium bounced back from the initial frost while Egyptian Walking Onion and baby garlic spike the foreground. It's time to take a seat.......time to sit, watch and listen. Can you hear the crows in your garden making a racket most mornings now? The squirrels are scampering through the forest mouths full of whatever it is squirrels store other than pine nuts. We had a little one munching on a cherry tomato the other day...so small and unafraid; the tomato looked as big as an apple clenched in such tiny claws. It's good for the soul, to take notice and appreciate the precious treasure around us.

Sometimes, I can get so focused on the jobs to be done, the prep for next year, the taking care of business before the heavy frosts and winter's arrival, I don't listen to what my garden is telling me, or look to see what nature is showing off...like Mr. Chipmunk stocking up for the long cold nights ahead. What if I hadn't been sitting, watching and listening? He was a highlight of my autumn day, with Olympic dreams, health maintained  on a diet of  Vitamin 'C' packed rose hips (Rosa glauca rubrifolia to be exact).

We've been sifting compost the last few days..and by we, I mean the Captain..not me. However, the shifting of same was carefully done by Moi... gently shoveled under the hoops where seeds of spinach and winter greens were planted way way too late. Chard, Dinosaur Kale and Red Bull Beets are still providing crop. Sigh....Chocolate compost...the way to a garden girl's heart. 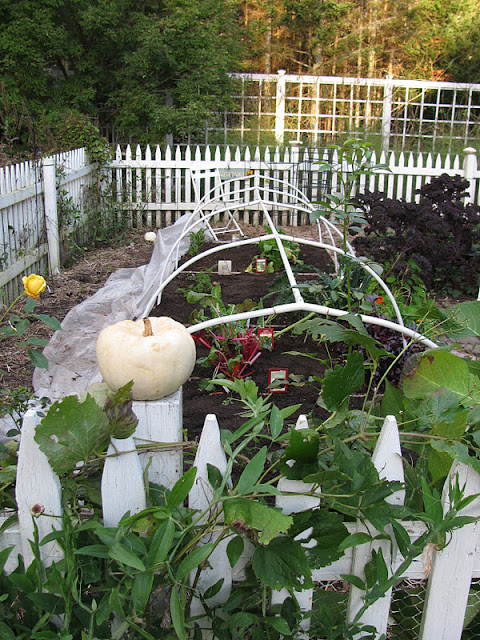 Mr. Chipmunk and I are thinking alike, storing food for winter. Today was spent blitzing kale and chard for soups; green confetti squished thinly flat in freezer bags. That way, it stores easily and I can break off bits of it's rich earthy robustness to add to wintertime soups. Meanwhile, I also tried a Kale Kimchi which needs a week or so to ferment. This fermenting business is new (again) to me, and seems a promising way to store a lot of vegetables. Yes, I've pickled things in the past, made cider and baked bread, but there's a whole world of ferment out there I haven't accessed yet.

The cold framed raised bed also received a nice dressing of compost. This is our second winter trying to extend the season with fresh salad greens and it can be done! Niki Jabbour will soon have a book available through Storey Publishing and I can't wait until it's out in December. Hers is a Nova Scotia experience so it appeals greatly to me, although the book itself is for all regions. 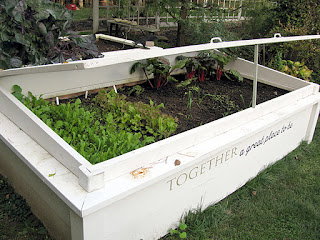 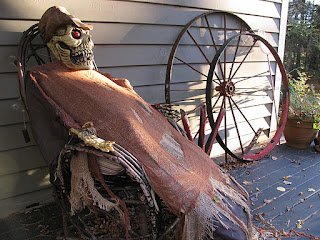 Happy Halloween!
Posted by Gardeningbren at 11:56 AM 15 comments:

The Sky is White 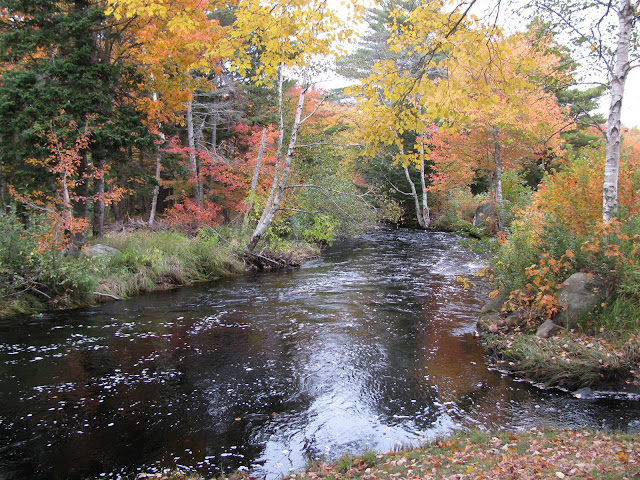 I'm waiting for blue skies to fully bring autumn's color to life. It's been white and grey overhead, but in the woods and along the river, it's so darn beautiful, it takes my breath away. Autumn in Nova Scotia...can't imagine wanting to be anywhere else this time of year.

We were hit by two light frosts a week ago, so we knew it was time for a tidy up. The summer squash, annuals and nasturtium said goodbye, and you know I'm just as happy. 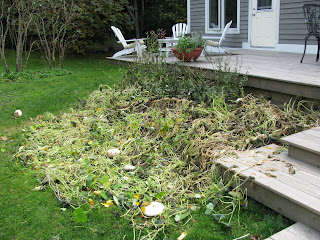 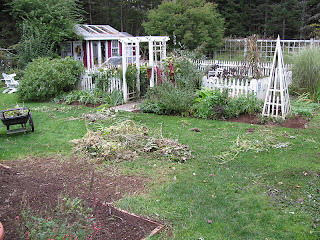 The view has changed, and now, the focus is on planting garlic, drying beans, making applesauce, ripening tomatoes. 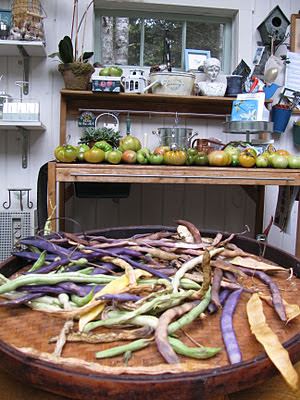 Arugula, mache and cool climate lettuce have germinated in the raised bed cold frame, so we are enjoying baby peppery leaves on open face sandwiches, as well as plates of tomatoes sliced to mirror autumn's bright glow.
The big yellow slices are German Gold, then I believe, red Wentzel, and the darker one is Purple Prince. The latter was quite prolific although for flavor, German Gold is outstanding. (am not 100% sure these are German Gold but that is what they were sold to me as)  My neighbour  was kind enough to offer her basil plants when she left the province and they have continued to grow in the warmth of the summer house. Just a brush against them, walking through the door, fills the air and makes me hungry.

It's almost "quiet time" right now. The shed needs cleaning out, the compost boxes need emptying...and there's that birdhouse to put up and it wouldn't hurt to edge a bit in the front to show we cared about that part of the garden as well. But...it should be a pleasure and not a chore...so I travel along the autumn woodland paths knowing there are things to do in the garden but secure in this thought......"all in good time".
Posted by Gardeningbren at 12:06 PM 11 comments: 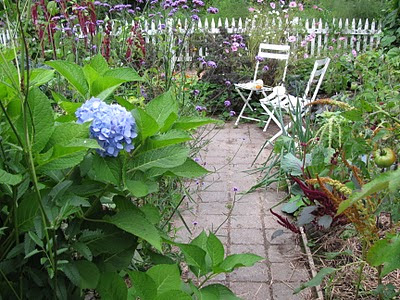 When we bought this property, thirteen years ago, I poured over books and magazines, trying to figure out what to do with a barren backyard bordered on two sides by woodland, a broken down ole Chicken House at the back, a dilapidated wall on the other side of the property, and a white gravel parking area outside the back door. Yes, it was discouraging and when we look at the photos below...it makes us tired ;-). The folks who lived here previously, had a productive garden (we assumed), evidenced by a huge exposed area of brown dirt. A lovely hand painted sign hung by the back door: "Garden Cottage". Yup..I was hooked...
So in May, 1999, we moved here to the South Shore of Nova Scotia to start a new garden. Viewed from 3 large kitchen windows shouldn't it have some 4 season structure or interest....mmmmm.  Shouldn't it also be close by, steps from the house, so we could enjoy it, work in it, smell it and treasure it. Residing the house, a new roof, new deck...it would all have to wait. The garden came first.
It was, then, and remains, a labour of love.  With no design skills in both our backgrounds, we felt a bit overwhelmed. There's no way I would have thought of ...well, for all intents and purposes....putting an English type of country garden in a woodland area, thinking it would work.  BUT...I saw it in a magazine...really I did. There was this beautiful lush vegetable garden surrounded by worn, faded pickets and that, was surrounded by deep perennial beds, full of color and texture. It was nestled in a forest...romantic, inviting, charming. "There" I pointed to the photo..."that's what I want...that, there, exactly! "

Things changed as the years went by....the fence rebuilt, a long flower and shrub bed, presses against it; the shed was also rebuilt so we could start transplants early. It evolved...we evolved. 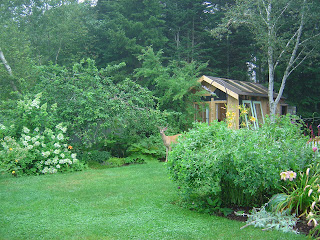 Last week, after having cleared out most of the tomatoes, bean and pea supports, I went to the upper window and took this photo, looking down on the back yard. It's hard to believe the change. We enjoyed the journey though..... the joys and challenges. It's defined us, as we defined it; each nurturing the other. 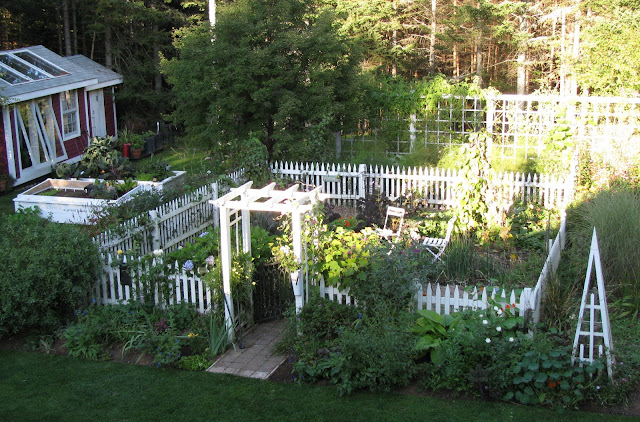 Posted by Gardeningbren at 1:20 PM 17 comments: