Ever since reading Liz Primeau's book "In Pursuit of Garlic", An Intimate Look at the Divinely Odorous Bulb, I've been a little envious she attended the famous Gilroy Garlic Festival in California. "If only we had a garlic festival here in Nova Scotia". Well, my wish came true! Avondale Sky Winery hosted the first ever Avondale Garlic Fest this past Saturday and my goodness, it was wonderful. Being keeners, we were pretty well there just after it opened but already people were starting to enjoy the vendor offerings. 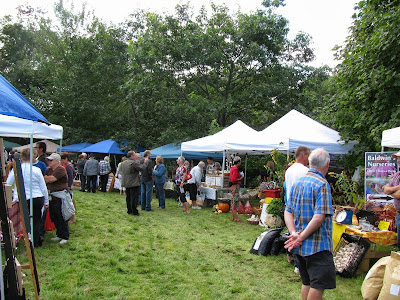 Contests included submitting favourite garlic recipes to be published in a cookbook, and competing for largest garlic bulb and largest clove. One farmer won that hands down using garlic she obtained through William Damn Seeds which I suspect is the variety 'Music". We were impressed!
There were jewellery makers, organic food produce sellers, glass makers and painters but I am rather partial to the metal works from A Twist of Iron as we have one of their early fire pits in our own backyard. This time of year, as the evening nights cool, you are most likely to find us sitting around it, having a hot bowl of soup or a glass of wine. In spring and fall, we use ours a lot.
The food area was packed solid so failed to get a photo. A highlight, with a reasonable wait time, was the food truck, Tin Pan Alley. If you follow this link, there is a menu for the event, served by a lot of local folks. No wonder this event is recognized as an "Incredible Edible Picnic Site". There are other picnics happening in Nova Scotia this time of year, so you could follow the link to find out if there is one near you.

Needless to say free wine sampling was a big hit. The winery was in fact a church, moved to the site from Walton, a nearby town. It is so beautiful, still mostly original inside with it's warm wood and carved font. Many people left with a wine purchase or a gift from the busy shop inside, a great place to visit at any time of year.

By the time we left, the parking lots were full, and cars were lined up right down to the main road. Try not to miss it next year. It was stinkin fun! 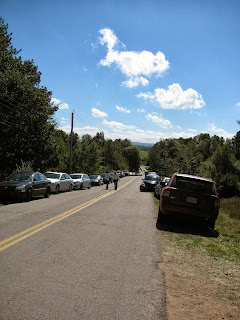 ****Update...just found out my gf Naomi won for her recipe "Roasted Onion and Garlic soup" which will go into the book. Am so so pleased. High five N.
Posted by Gardeningbren at 11:41 AM 20 comments:

Where Has the Time Gone? 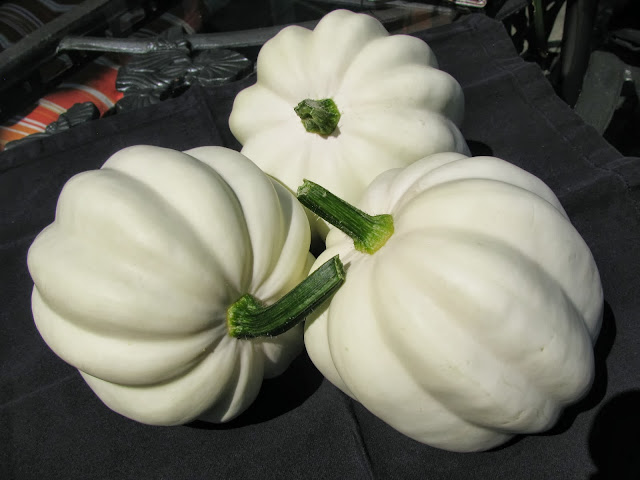 August flew by so quickly and now here it is September and what do I have to show for it? Well a few photos...that's a good place to start and how about a bit of a catch up on the garden? A highlight are the White Acorn squash, each a porcelain beauty bright against the dark soil of the fall garden but looking quite smart on a black napkin don't you think! The flesh is surprisingly mild though and white inside as well so the question remains, grow for beauty or taste. I would like both please ;-)

Technically it isn't autumn yet, but goodness, it certainly smells and looks like it. The brights are so brilliant and the darks so deep, the camera just doesn't like the challenge of making a good photograph. So here are some of the best from the last many weeks.
Beans were late getting going but they have been cropping well. My favourite pole bean is Fortex because even when mature, they are still tender. My favourite bush bean is a French Filet called Tremblant from OSC . It's a great cropper for our climate here in Nova Scotia, and delicious. They hang like chandelier earrings from the plant. 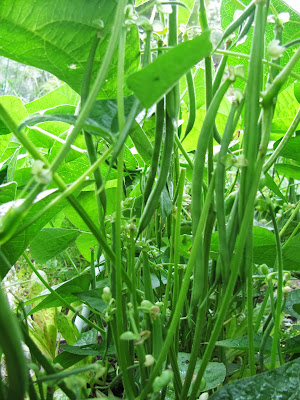 Most of the carrots have been dug up, lettuce mostly gone, but the Brussels Sprouts have a lot of growth, even though the sprouts are small. This purple variety is called Red Ball and they are growing in my raised bed. 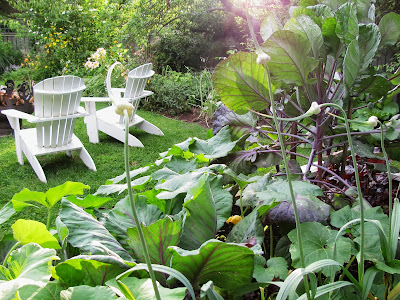 The garlic is cured, cleaned up and in their open wire baskets for our use, but below shows where we hung them after removing from the ground. Old garden rakes make great hangers; who doesn't have a rusty one with prongs missing they just don't want to part with! 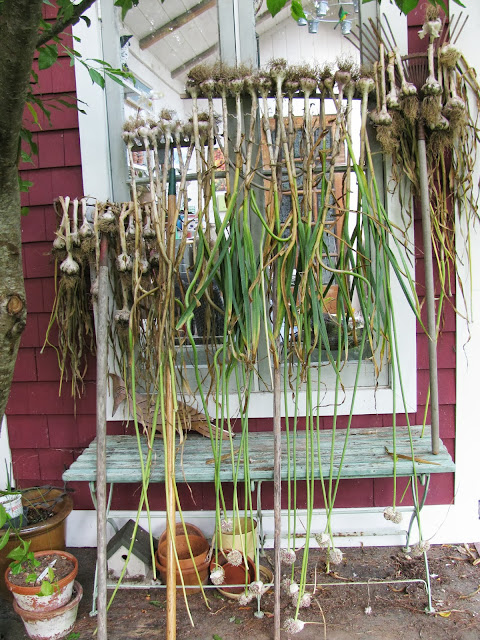 Please note the long garlics with the scapes still on. There is discussion on whether removing scapes makes the bulb bigger and I think indeed, in poorer soil it certainly would. But this garlic is quite large and as large as last year's crop. The variety is Susan Delafield, a hugely tall and later maturing garlic so at least for this variety, I would leave some scapes on as long as possible as I use them (after being whizzed in the food processor) in my salad dressings and also boil up the scape ball with new potatoes. 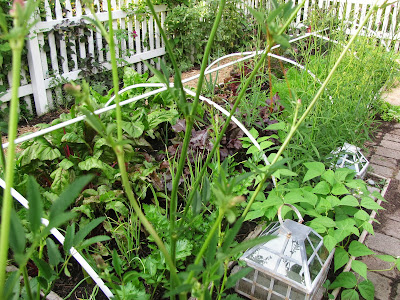 The above bed inside the fenced garden is still producing well but as I mentioned, the carrots are gone and that section was seeded this week with Dwarf Pak Choi and Red Kitten spinach and germinated in two days with the lovely cool weather we have been having. It is certainly time to scatter some radish seeds, any of the cool crops we planted out in early spring like arugula, mache, tatsoi. Then, when the weather gets even cooler to frost, cover them with a row cover, or cold frame lights, and you will enjoy the crop for an extended period.

So a final photo of the wildness of the late August garden.  As the hummingbirds head down south may I make a kind reminder to keep your feeders full, helping them on their journey as well as the other feathered migrant garden workers who don't spend the winter with us yet are extremely valuable to us for their strong work ethic. 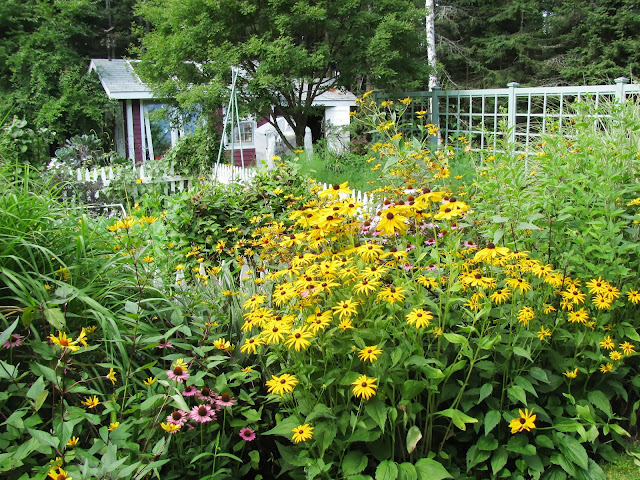 Posted by Gardeningbren at 3:33 PM 27 comments: