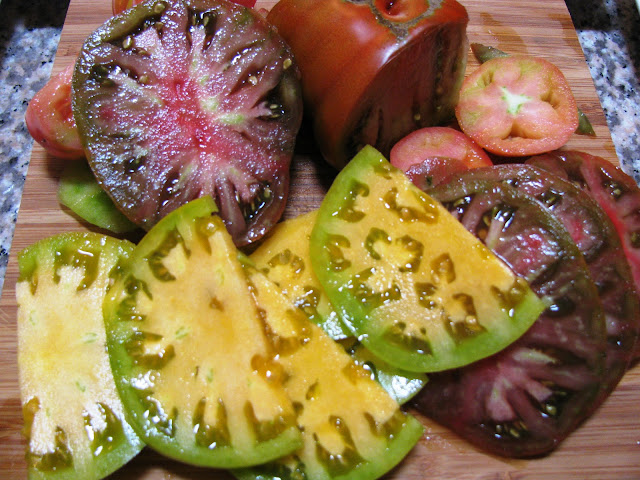 Considering the blight, and the fact that many tomatoes had to be picked green, those not affected continued to ripen indoors and out. So I thought about that Tomato Tasting I attended at Annapolis Seeds last year and....well....couldn't I do that too, on a smaller scale. So here you have it, a photo from my first annual tomato tasting event! Thanks girlfriends, for sharing today, it was great fun. 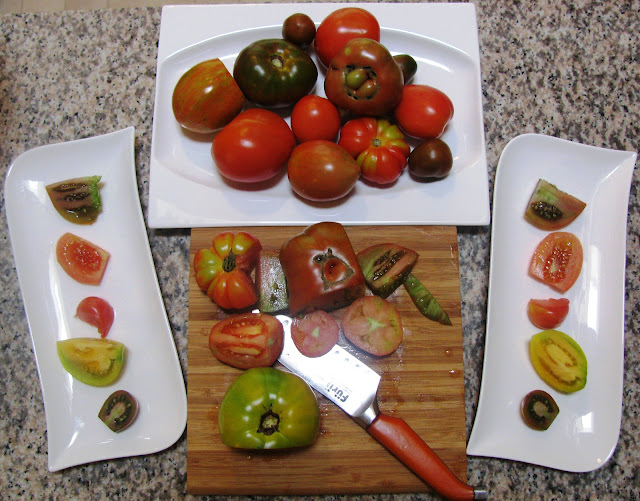 Not as many varieties as hoped for this year...on accounta..you know. But, just the same, the taste of those we tried were in fact, complicated, smoky, sweet, tart, robust and more. Just six to sample but what a difference in flavor and texture each one possessed. Starting from the top of the white plates on either side, we have Paul Robeson, Speckled Roman, Costoluto, German Gold and Black Plum. Hands down for our taste, we loved the German Gold best. It was ripening from the inside which is why the skin is lime green, but wow, such a rich deep delicious tomato. We've grown these for a few years, and I am so grateful I was able to harvest some. Tomatoes really do ripen from the inside out, as you can see. Paul Robeson and Black Plum were both complex, with that sort of smoky, wine/fermented flavor that's so different from the usual red tomatoes. Black Plum was more intense though (considered a cherry tomato but more a small purple paste size). Both are definitely worth growing again (Annapolis Seed) especially as both have a high yield and seemed to have some resistance to the blight. Also, they last well on the counter in a bowl for a long time (I like my tomatoes warm or room temperature).

Costoluto Genovese is sweetly intense however think mine were smallish compared to others I have seen. (Likely the grower's fault that is!!) Speckled Roman was a bit bland but it's a paste tomato mostly, although it can be an eating one as well. It didn't stand up to the tough heirloom competition but it is fantastic as a cooking tomato. Mexico Midget didn't enter the taste test but should have been there. This is a vigourous grower and if you don't have room for it, leave it off. However, if you have a trellis going into your garden, (imagine this) it can be just as creative to grow as Morning glory..or both together..that would be fun. I have mine trellising at the garden entry with 'North Shore' sweet peas although the sp's aren't in bloom YET! Photo to follow hopefully.

Meanwhile, (have to share) we were delighted to share our garden with the readers of Garden Making in their latest edition. Thanks to all the folks there who were so generous with their time and efforts, helping the garden shine in their publication. "Is that our garden" I thought!! Goodness. Special thanks to James, Heather and Beckie and most especially to Niki Jabbour, who inspires me further with her book, Year Round Vegetable Gardener. 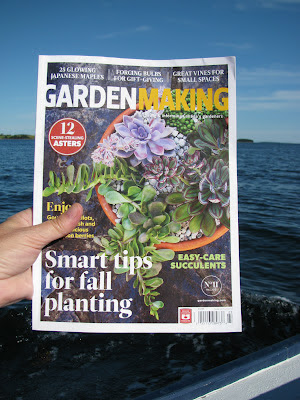 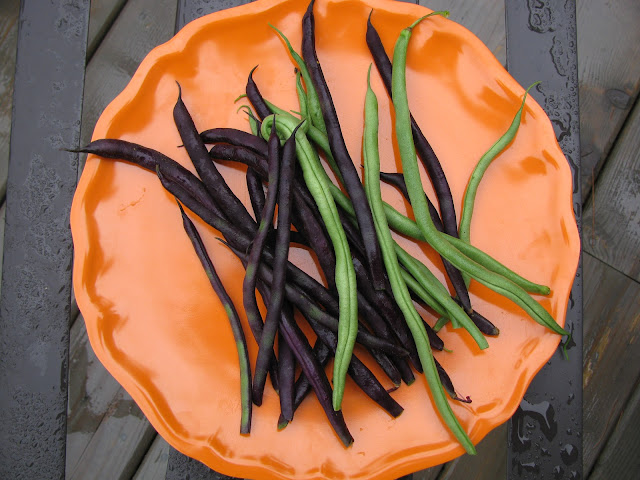 Well, for the good news first. We have been harvesting some lovely beans, which, although a little difficult to get growing, are finally showing their stuff!! The pole bean varieties are Fortex and Blauhilde, the latter a particularly deep blue purple. I prefer them over Purple Podded because I find Blauhilde more tender but not as prolific. I also love how they look winding their way up the pole support and with a few Painted Lady Runner Beans to liven the floral presentation...the hummingbirds are in heaven. 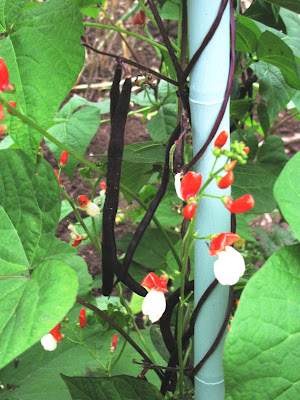 We are also harvesting some tomatoes, mostly the Costuloto Genovese, with their beautiful ribbed fruit and great flavor. They've been a tidy plant to grow, not taking over, averaging about fifteen tomatoes per plant. In fact they have done better than most being rather resistant so far to the tomato blight that has swept through the garden. Early blight I have experience with, but this blight, which I feel sure is known as late blight...swept through in just a few days, like a flame thrower attack, the leaves totally withered and died... so quickly, I was overwhelmed. It is unusual to have this in our area, and others are reporting it as well. The combination of a wonderful hot summer, and then August rain and fog, seems to be the culprit. Here are a few photos of what it looks like here.... 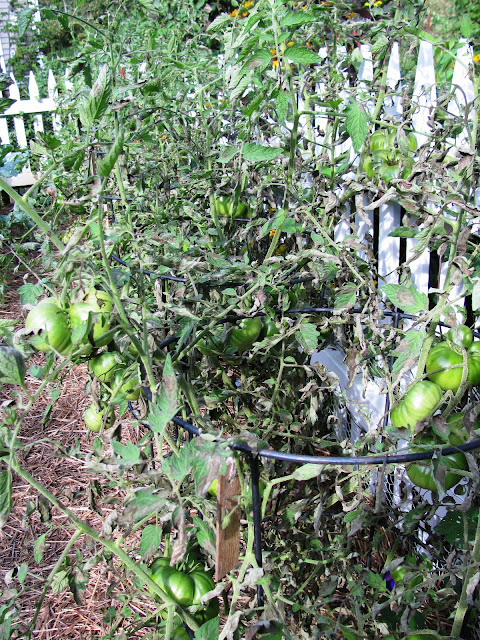 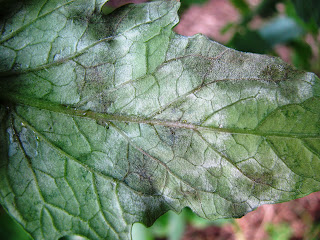 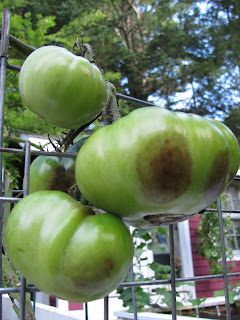 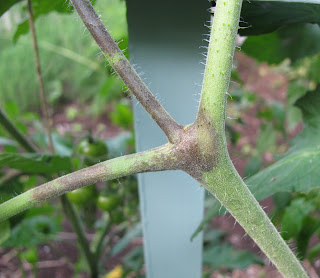 It was with a heavy heart, I removed many of the tomato plants. Bagged for incineration by the municipality, they are now disposed of. Gardening is full of ups and downs, but I must say, this truly took the wind out of my sails. Will keep on the positive side of things though, and that's all one can do. 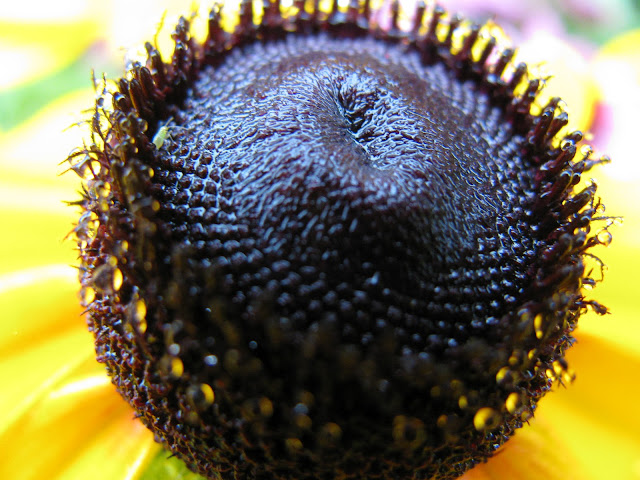 Moving right along...well here it is August already!  We began with some much needed rain as the end of July had been very dry. All open fires are banned in fact, so our firepit is getting no use, except to be filled with garden debris...not a pretty sight. The sun came out today, and I can almost feel the garden perk in it's gratefulness, blooms straightening up to kiss the sky. The daylilies are in their prime, although those spent are like sodden hankies and need plucking off.
Still, I can't believe it's August, even though the tomatoes tell me so. They've had a bit of blight hit them...not much, but enough that if I don't get on it today, snipping off lower leaves, the whole thing might get out of hand. Mulching underneath with newspaper and straw has, over the past two years, made a big difference but some varieties are more susceptible. This must be the case with Amish Paste as it is the worst hit and yet, it is in a prime spot. Go figure. Carrots and other crops are starting to make it to the table, which on rainy days, we like roasted in the oven, bit of rosemary, olive oil, hunks of garlic....lovely.
Can you see our steps in the background of this photo above? When we started the garden, thirteen years ago, the back yard was a huge plot of stony dirt, with a white gravel patch where you could park a car, at the foot of where the steps are today. When I think back over the years, and the soil we made, and brought in, collectively, it seems a lifetime. But we knew even then, we wanted to see the garden from our kitchen window, and not have to walk far to gather food for supper. 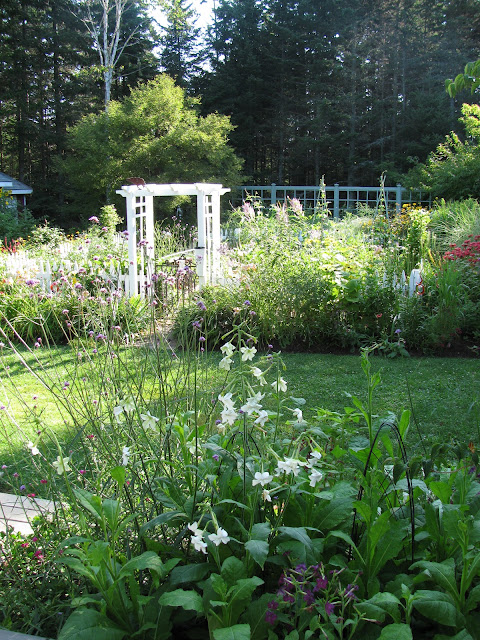 I'm working outside today, so will give an update on what's growing in the veg garden shortly and in the raised beds. The bean tepees, you can just see them off center in right of the above photo, have the vines right to the top now, and are showing a variety of flowers. Meanwhile just off the deck, the tall purple flowering Verbena bonariensis, and the hugely fragrant Nicotiana 'Jasmine Alata' from Renee's Garden Seeds, are popular with the hummingbirds. The Nicotiana  pumps out perfume from late afternoon into the evening. Can't ever be a better annual to bring scent to a night garden.

Time to get my hands dirty.
Posted by Gardeningbren at 1:16 PM 22 comments: