Can't say enough about this lovely lettuce, speckled, red, green, delicious, hardy..but what variety is it? Not sure! I haven't saved the package as usual, but the tag in the soil says Lettuce 'Spring Mix'. Whatever ....the camera loves it as much as we do.

Late September 2011 this same unknown variety germinated in the bed we put the row cover over in winter. We didn't harvest any of it as it had barely begun to grow so the patch was covered with fleece, straw and the plastic, and forgotten about until spring. This below is last autumn's sowing, a bit ahead of this year's sowing and ready to pick.
The dwarf Pak Choi below, germinated very quickly this spring, so needs a bit of thinning soon. It will be yummy in salads, as will the thinnings of the French Breakfast radish. 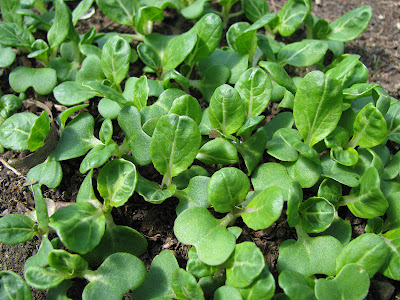 You know, I find radish one of the hardest things to grow. Well, yes, they germinate but it's getting that lovely root to grow into anything substantial that seems to be the most difficult. Perhaps I don't thin as much so have been doing that this year. Still, I have seen other gardens where those red balls are just pushing themselves out of the ground, so closely grown, like bouquets for the table. Maybe our soil is too rich, or too acid...or?  This is my second year trying Heirloom Watermelon Radish, again, all germinated but...will the root form to an edible size? 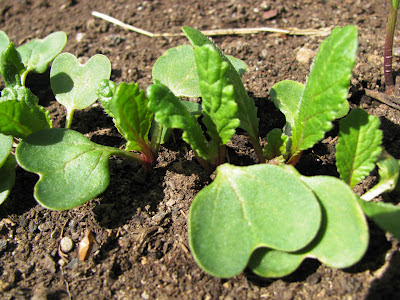 I am pretty excited about something that is growing in the raised bed and it's new to our garden. 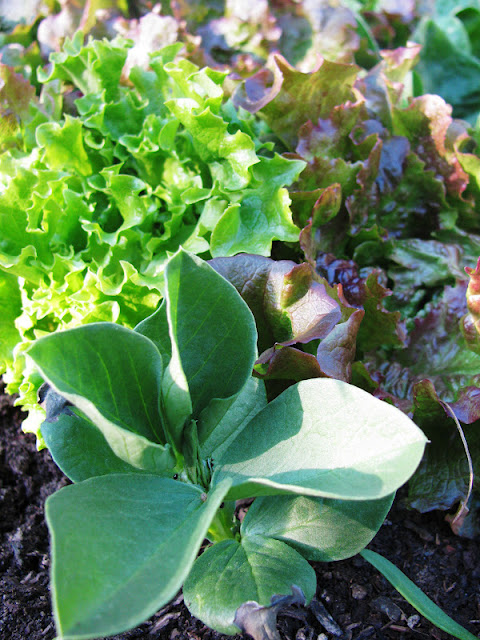 Do you remember I started pea and broad beans in the house in February, growing the shoots to add to salads. Well, after soaking quite a few of the Windsor broad beans, and seeing them sprout their little white root, I jammed as many as I could in the pot on the kitchen windowsill. However, there were six or seven I just couldn't get in there so, they went outside in the raised bed with the cold frame cover. At the time, I could barely get my finger tips in the frozen soil, but enough to cover the seeds and ...well it was a test, just to see. A few times, the frost below pushed them out of the soil but now, they are all growing. Amazing! You know, I have never grown or tasted fresh broad beans but my Italian friend Carla says they are delicious and are very popular in Italy. I wasn't too pleased with eating the shoots though especially as I read online they can be toxic if you have a low tolerance to something in them but they didn't seem to bother me. Nothing to write home about though; the pea shoots were much more to my taste.

Building on 'bean success', I ordered Sweet Lorane Fava from Annapolis Seeds which I had planned to try but didn't notice they can grow up to seven feet tall. Do I have room for them? After all, there are only so many beans one can eat, and with Blauhilde Pole, Fortex, Bush Pencil Pod and Ruckle from Salt Spring Island, the latter also from Annapolis Seeds, think this year's bean plate is full.

Posted by Gardeningbren at 2:37 PM 26 comments:

April 15th, 2012. Thoughts of the RMS Titanic sinking have been front and center locally. Media highlights covered by our local newspaper, the Halifax Herald have been remarkable especially their insert reprinted today of their front page one hundred years ago. It's like stepping back in time, and in fact, all the events abroad and locally, have been about, stepping back in time. It is here, in Nova Scotia, most of those lost and recovered, were put to rest eternally at Fairview Lawn Cemetery and other cemeteries in the area. Clicking and following the Fairview Lawn link will take you to the graves, a beautiful video sharing the poignant loss, accompanied by music.

Seafarers die every day all around the world, and organizations such as the Missions to Seafarers support them in so many ports worldwide. Still, we sometimes don't realize how many of the goods we consume come to us by sea, nor realize what hardships are undertaken by others, to deliver the commodity. The Captain and I have had many a sorry night aboard ship, far from home, full of worry, seas high, pounding waves, cargo loosed. No close calls thankfully.

How lucky, I have often thought, those on board the Titanic that night, had calm seas to say goodbye.

RMS Titanic was a passenger liner that sank in the North Atlantic Ocean on 15 April 1912 after colliding with an iceberg during her maiden voyage from Southampton, UK to New York City, US. The sinking of Titanic caused the deaths of 1,514 people in one of the deadliestpeacetime maritime disasters in history. She was the largest ship afloat at the time of her maiden voyage. One of three Olympic class ocean liners operated by the White Star Line, she was built between 1909–11 by the Harland and Wolff shipyard in Belfast. She carried 2,223 people

If you ever visit the graves in Halifax, Nova Scotia, Canada, and I sincerely hope you do....you will likely hear a piper lamenting, the music drifting, touching your heart. Your cheeks might be moist from the salt air or from tears, feeling the loss of so many. It is quite moving to see the same date on every grave stone and to read the inscriptions.

Spring bulbs are pushing through the ground now, and the many trees at Fairview Lawn Cemetery are budding, bursting with life. The sun reaches bright finger tips, warming the cold granite headstones, arranged like ribs on a ship, bodies planted below. The monuments mark those lost but not forgotten, even now, so many years later.

Posted by Gardeningbren at 10:10 PM 8 comments: 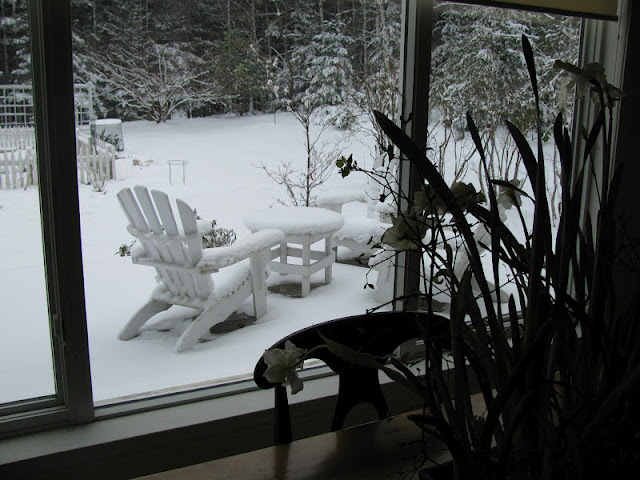 We were pretty amazed to wake up to snow this Easter morning but all and all, a rest from the garden was welcome. On Saturday, we got after the Sinky Hole...yah, that's what we call it..."The Sinky Hole". It was on "the list".

Last time we attended to this was four years ago when the wheel on the baby tractor fell through the lawn.  We think there's a spring under there, but who knows. Anyway, it has deteriorated quite a bit so it needed attention.

We don't usually hire, and try to manage as much as possible ourselves but.... saving a few dollars sometimes means spending some to begin with and this meant...'high five'...purchasing the handy dandy sod lifter from Lee Valley which worked a charm. 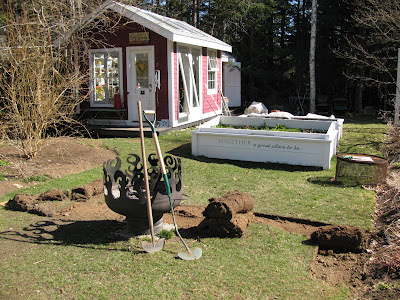 Although the area between the firepit and the raised bed doesn't appear to be very uneven, it was, and someone (likely me) was going to do serious injury to an ankle if this wasn't taken care of. 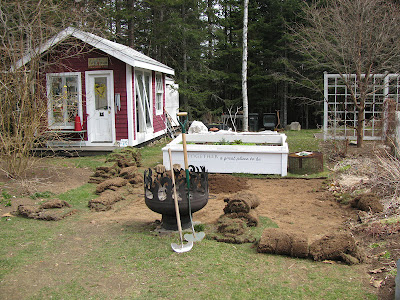 The sod removed, we began to dump soil, trying to level it as much as possible. This deposit amounted to one and a half cubic yards of material. Tamped down with a trusty home made block, we lightly raked the area, added some fertilizer and replaced the sod. 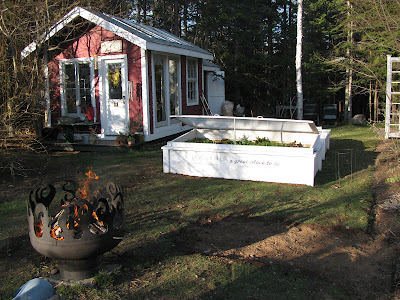 Sigh...   End of the day, we had a nice fire, relaxed and admired our hard work. Ahem....you will note the one spot that didn't get sodded. Well, the best of plans can often go awry, and the problem was, some of the sods just disintegrated, but we leveled this portion off, and put grass seed on there. Yup..we might have to do that twice if the weather doesn't cooperate but, at least, the sinky hole is gone for another few years (we hope) and it is easier to walk back there, for sure!! I will have to raise the perennial bed on the right a little bit but that should be easily done this time of year.

Now, back to nurturing baby veg and flower seedlings, and attending to the rest of the list:

1. re-stain the pickets
2. change the stain color on the beanwall  not this year
3. edge the beds when it isn't snowing
4. spread some bark mulch on the front beds
5. get out the summer furniture
6.  etc. etc. etc.