Oh for a Quince Tree 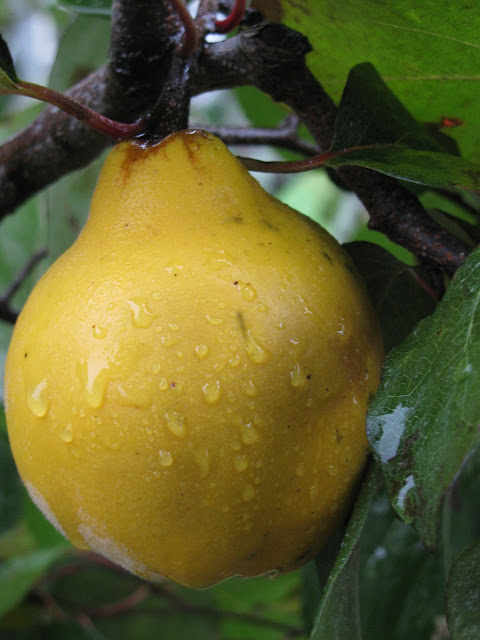 Although garden envy isn't becoming, the truth is, I am seriously coveting my girlfriend's Quince Tree. She's had it about five years now, and in late autumn, when I visit, that tree is absolutely loaded with fruit.

Wisely sited just outside her dining room window, it's a central focal point lasting for months, a feast for the eyes in anticipation of the harvest. Biblical in it's beauty, fruit hang; golden baubles reminding me of a painting, Medieval, a Maid stroking a Unicorn, resting beneath it. I can almost see it.
I shouldn't be envious however, as each year, a generous gift is given, an abundance of quince heartily shared. Naomi waits until they start to fall to the ground, a signal of ripeness.

If you have never felt, smelled, eaten or seen a quince, the sole member of the genus Cydonia, that wouldn't surprise me. Here where we are in Nova Scotia, Zone 5/6, not many people grow quince trees and part of the reason is, you don't often see them available in nurseries. The fruit, shaped much like a pear, is covered in a soft down when they are immature, but even then, if you pick them and bring inside, you won't believe the fragrance. A bowl full of ripe Quince can in fact, be overwhelming to the nostrils.  It reminds me of orange blossom, which is perhaps why it marries so well baked in orange syrup with orange flower water. Then there is the problem of its texture...they are hard as rocks and so must be cooked. I expect in Mediterranean climes they might ripen to an edible state outdoors but not here. The best way I have found to soften quince...the easiest way...is to prick the quince, wrap each fruit in foil, stand them all together like soldiers in a casserole dish, and bake in the oven for about 45 minutes at 375 degrees. You don't want them turned to mush so getting them to the right soft firmness is important...firm like an uncooked apple or pear. The recipe I use is from Sarah Raven's Garden Cookbook..a treasure. "Baked Quinces in Orange Syrup" awesome! 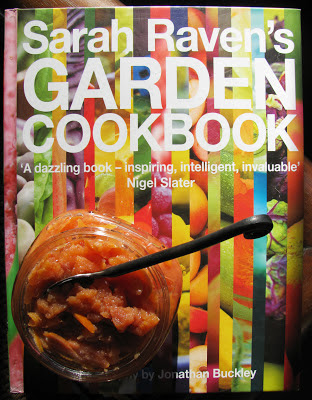 Another recipe from Sarah Raven's in the same book, is Windfall Apple and Quince Cake which she notes is a Montagu and Sarah Don recipe. Instead however, of going through the trouble of peeling, coring and chopping quinces (need a cleaver for that), I substitute 1/2 to 3/4 cup of my Baked Quince in Orange Syrup (above), stir in gently, bake, and stand by for the applause. I skimped on the almonds below but next time won't. It should be totally covered. 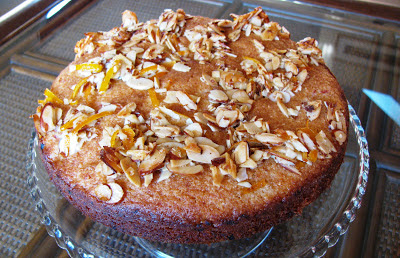 Quince are considered sacred to the Goddess of Love and Fertility, and some scholars believe in fact, it was not an apple but a quince, Eve offered to Adam. The fruit of Love. Well see, I told you I was coveting it. Sinful yes...ah love, ah Quince!
Posted by Gardeningbren at 2:55 PM 29 comments: