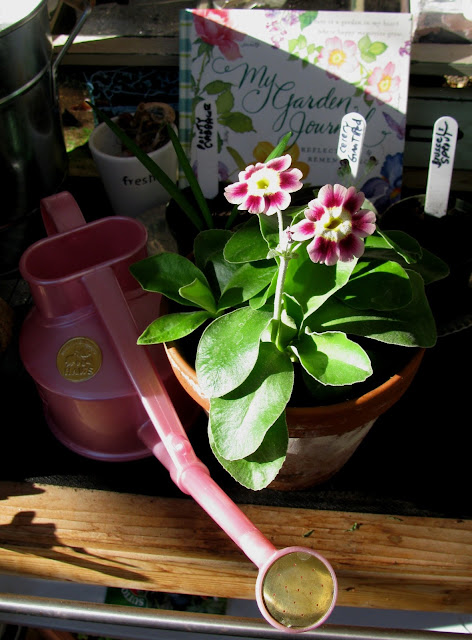 We've had some wonderful sunny days here in Nova Scotia.... there's nothing like sunshine, to inspire a gardener. Most afternoons, you'll find me in the summerhouse enveloped in it's fragrance of damp earth and rosemary. Perched around are the first auriculas, and I see some forced tulips are pushing through their pots as well. The red cabbage Kalibos and Brussels sprouts Red Ball have germinated, but the celery, Giant Red, is taking it's time. Seed packets are organized and lists are being made..when to plant what, followed by this or that. Meanwhile, the ladybugs have hatched, and are climbing all over the glass roof panes, and searching through the speedy veg..... but they won't find any aphids there I sincerely hope. 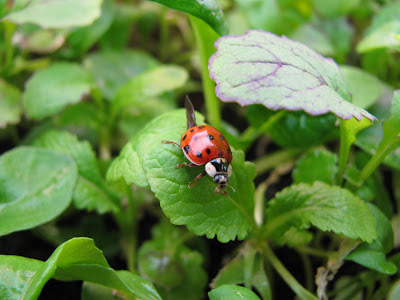 Two monster beetles have climbed out of their winter nests making it hard to concentrate, as I must always be aware of where they are, hoping they won't fall on my head or worse, fall down the back of my sweater. But, I can't put them outside; there is still lots of snow and the temps are still below freezing at night. Inside however, there is in my heart, anticipation knowing soon, spring will be here.

Outside, the cold frames have done their job, working like a refrigerator  keeping the plants started in the fall, alive through the winter. Now that days are lengthening, I see some perkiness. Three hardy greens our family enjoys are tatsoi, spinach and mache. These are just waiting their turn to leap. 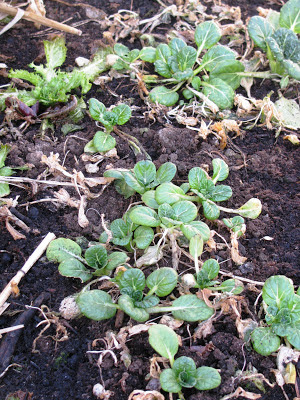 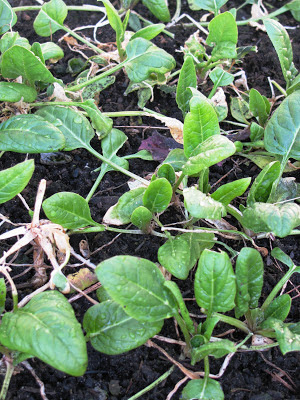 Lifting the frame yesterday, feeling the steaming heat and fragrance of the soil, prompted me to push aside some of the debris and sprinkle on some spinach seeds. Wonder if it will germinate? I say yes, and it doesn't hurt to try. Here's a photo of the ratty bed, but watch this space; it won't look so desperate for too long. 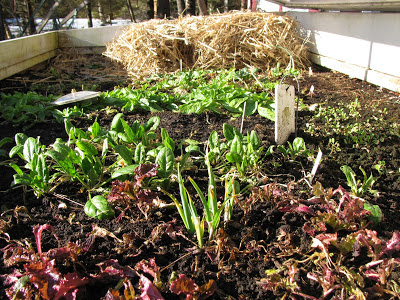 Off to the right, you can just see baby arugula and mizuna ...tiny little leaves from seeds germinating last fall, quite late. That's as much as they grew, and here it is now, we've just about got through the winter, temps as low as minus 24 degrees Celsius, and this outside refrigerator did it's job. Oh, under the straw there's baby carrots. This raised bed/cold frame is about eight foot long and four foot wide and if I were more organized, it could be producing better, but I know in a month or so, it's going to look much different than it does now.

Well, time to go back inside and perhaps start more seeds, but at the very least, sit back and let the sun shine on my face....away from the beetles of course. 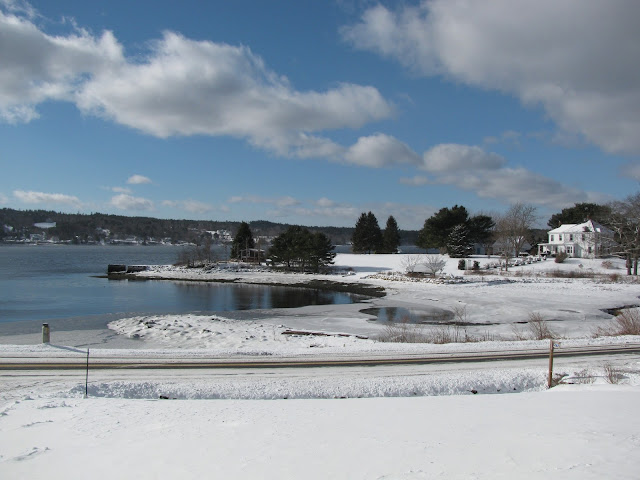 Here in Nova Scotia we've had quite a bit of snow the last two days. In fact the Captain is getting pretty fed up and says this better be the last of it "I've had enough!" Poor thing. That's what happens when you offer to plow the neighbour's drive, then the senior couple in town ask if he wouldn't mind doing theirs too and besides that, he has the business to keep clear for parking. While he's complaining...cold feet, stiff limbs yada yada...I try to keep positive. There have been a few arty adventures but I have been craving for some away time, and some garden time. So off I went to Suz and n's, drinking in the view above from their home on the LaHave River. Bliss.

Can you see the salt marsh to the right? Well under that cover of ice, is a rich and abundantly nourishing area where the fresh water from land above, flows down to meet the river bringing with it all kinds of tasty food. I suspected we might see a lot of bird activity but Oh My Gosh. On that day, the list included, Canada Geese, Bald Eagle, American Kestral, Buffleheads, Loons and Merganzers. A week or so ago, Suz saw a vulture and yes, she showed me the photo and it was definitely a Turkey Vulture. So rare here in Nova Scotia, which makes me wonder how did this bird manage with all this snow? The marsh is a treasure, as all marshlands are, and how lucky they are to have it in front of their home. Better than watching television!

So we sat inside, looking out through the door: 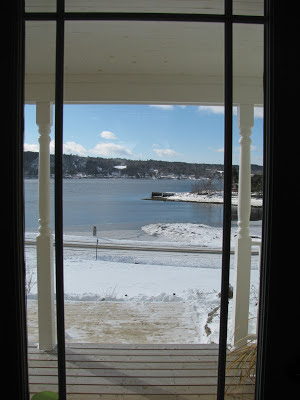 ...sitting in front of the fire, reading old garden magazines, 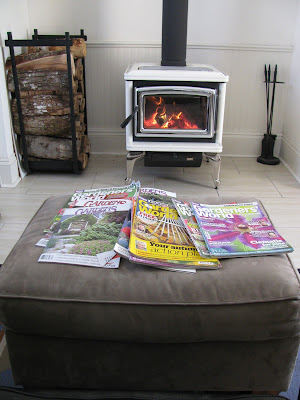 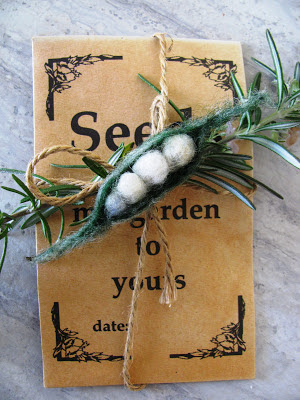 Told ya I was doing some arty stuff...tried felting and came away with a few pea pods and an autumn scene. Very satisfying craft and hope to do more. No winter blah's happening..No Sireeeee!! And then, Mr. Rabbit/Hare showed up in the garden that very same day and well, isn't it his garden too? I love his winter coat but by Easter, he will be chocolate all over. 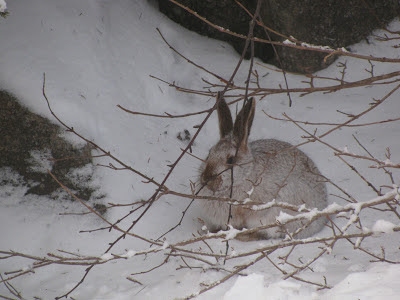 The garden sleeps waiting for spring, and I wait also. But, I will enjoy these winter days. Yes, yes (I am convincing myself) yes, I will! 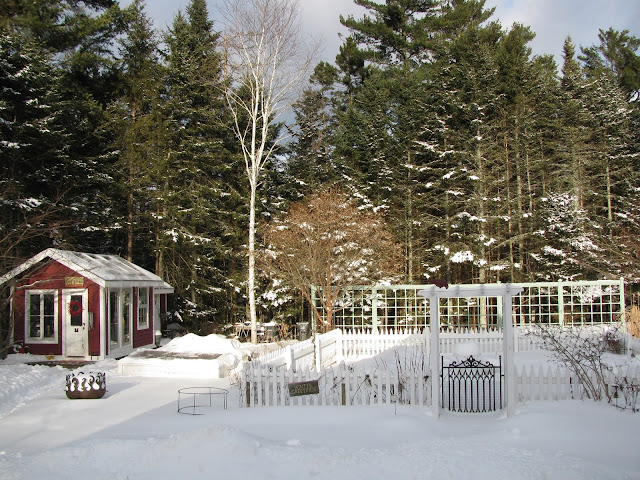 Posted by Gardeningbren at 6:49 PM 36 comments: