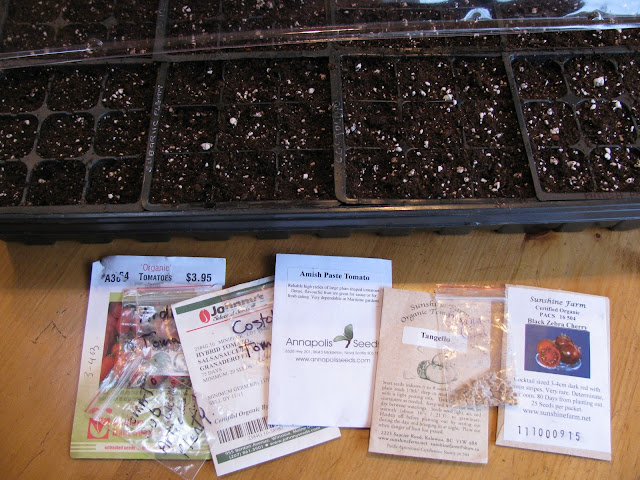 Well, they're in. May 15th is considered our last frost date here in our USDA zone 5/6 garden. Six to eight weeks ahead of that is about right for starting Tomato seeds inside. The ten varieties include a number of new ones for me. If you recall, we had a pretty bad wipe out last year from late blight. I swore to give tomatoes a rest but, here it is, the grief of last year a sad memory; hope rising in my heart no disasters claim this crop. My choices include shorter season plants with stronger disease resistance, some determinate (won't grow so big) and a patio variety. The seed houses are linked to location by clicking on their names.

4.  Costoluto Genovese, also from Annapolis Seeds, one of my favourite tomatoes. It is an Italian heirloom, and just awesome in flavour.

5.  Incas Hybrid from William Dam Seeds, determinate, 65 days, organic, mature all at one time. I am hoping if late blight comes, these will give me early tomatoes. These are like a smaller paste tomato.

6.  Granadero, Johnny's Selected Seeds, organic, determinate, have been a good cropper for me previously. A really good paste tomato with strong disease resistance.

7.  Mountain Princess, friend supplied, Available at Annapolis Seeds whose catalogue states this is a large and early cropping tomato, perfectly round, red 4 inch fruits produced on 3' plants, an heirloom from West Virginia. Early to beat the blight I hope.

8.  Tomato Sub Arctic, Plenty, friend supplied but available at Reimers Seeds and Sustainable Seeds. This is one of the world's earliest tomatoes (beat the blight early or not?) Determinant and disease resistant.

9.  Andrina, patio tomato, friend supplied but now I wonder if it is Andryna which isn't patio at all. Stand by! The latter is a big'un.

10. German Gold, my seeds from our tomatoes, indeterminate, delicious, yellow beefstake. I've written about these before here.

So that's the line up. Seeds were planted two days ago; will be watching closely. As soon as they germinate, they go under grow lights inside.

As for outside in the cold frame covered raised bed, photo below. We have first leaves of spinach virflay (one of Niki's Pick's from her book Year Round Vegetable Gardener), and also Lolla Rosa lettuce and a few radish. The mache and tatsoi from last fall have to be harvested as they have leapt ahead, and the tatsoi wants to go to seed.  Soon new greens will go in there and I have a few exciting varieties to try. Can't wait.

In the raised bed with the hoop covers, the mizuna (purple and green) have germinated as has the arugula. If you aren't familiar with these greens, they are winter hardy in a cold frame and mildly spicy.

Remember, there is still snow on the ground, and below freezing at night. Today's daytime is about eight degrees Celsius.  It's warm under the hoops though. Must put the thermometer in there. Here is a trick I use when starting seeds at anytime outdoors but especially now in the coldframe.  I broadcast or plant the seeds in rows, making sure the soil is damp and then cover with a light piece of white fleece. It helps protect the seeds, keeps them a little warmer and also helps keep the soil dampish until germination takes place. Once I see the green leaves, depending on weather, I will remove the fleece. This time of year, this is all taking place under the plastic hoops or cold frame. You would be surprised how much the late winter and early spring sun dries out the top layer of the soil. 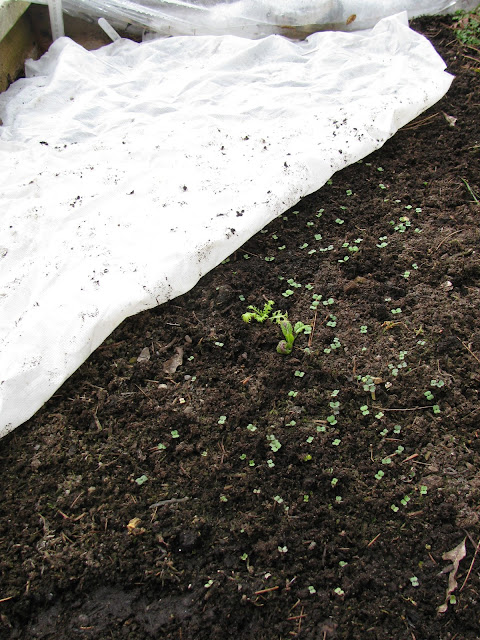 If you are considering building a cold frame, do it. Even though ours are plunked like coffins in the garden, I don't know how we did without them. Anyway, great directions for constructing one in The Year Round Vegetable Gardener and also Eliot Coleman's book Four Season Harvest. Mine is a little different, being a raised bed, the cold frame cover came later, and for my age, this is a better option. I wouldn't want to be on my knees, wiping off snow in the winter digging for plants but I expect carrots and root vegetables would do better with that type of cold frame than mine. It's all in what you want to eat through the winter or overwinter I guess. For us, it's greens.
Posted by Gardeningbren at 1:49 PM 23 comments:

Why Grow it and Is it Worth It

Yes that's snow and perhaps more to come. Bending over the cold frame, I admit, I asked myself why am I doing this...how important is this to me to be out here cutting greens for supper, was it really worth it? We had the good fortune to be able to build our own raised bed cold frames but in actual dollar value, how much in the long run would they eventually produce..would it cover the cost..again...was it really worth it?

Then, to my delight, when checking my blogroll today, there were two great write ups from Marguerite at Canoe Corner answering my very own mutterings, and A Woman of the Soil, awakening in me the value of the worth. I suggest if you are on the fence about growing food to eat, you visit both of these women's blogs, follow the links and watch the videos on Marguerite's especially. "Argentina's bad seeds" video was shocking to me.

The answer to why grow it and is it worth it, is individual to each of us. What might have started out as a 'little hobby', could have morphed into a business venture and publishing career for instance. For others, it might simply be a matter of necessity and feeling proud of providing for oneself and family. My garden story was a bit of a long way around. We were not meant to farm; we had a sea career. But somehow, by good grace, we were hired as caretakers on a farm on Saltspring Island back in the early eighties when we returned to Canada. Oh sure, we had grown some cucumbers in a small square behind a house we lived in on Vancouver Island when ashore, and we had a forest plot about as big as a car on one of the Gulf Islands when we took care of Capt's mom and dads place, but you couldn't really say we had a proper garden, or that we knew anything about growing food. But to this day, what kept us trying was that little miracle..YOU KNOW...the one where a seed germinates and you think..OH MY...it's green, it's growing..it's mine! It is like giving birth and in a way, you are the mother and father.

The years pass and another miracle..you have a child; you take him down to the fields while you pick corn for the market. 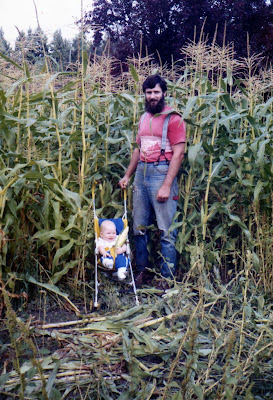 But sadly the years pass too quickly, you leave the island, you start a garden in Nova Scotia. Whole different ball game. This place has really cold snowy long winters, soooo not British Columbia. In summer we grew tomatoes, some greens, potatoes and beets. I still wasn't passionate, but did enjoy growing a garden very much.

The corn baby grew up, graduated from high school and we headed here to the South Shore of Nova Scotia. That's when things changed. New Beginnings perhaps...empty nesters...yes definitely. It was one of the warmest springs on record, and so before we even had our furniture moved, before we painted the interior of the new house....we put the garden in. 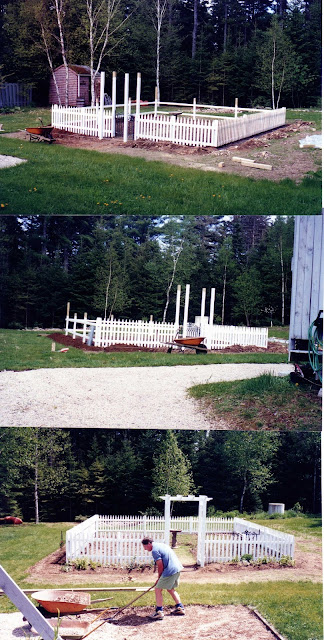 Why grow it? Simply put, it makes us feel good. Not just to plant, help germinate, grow, care for, cut, serve and eat it...there is that sense of accomplishment, that feeling of triumph over adversity in some instances. Better yet, I know where my food came from...the garden in our own back yard.

There might be a foot of snow but I take heart. Inside plants are telling us it's spring. Bet your potatoes are sprouting in the cupboard as I type; bet your garlic bulbs are showing their greens. They want to grow. Look, watch, listen. Like every speck on this earth, grow is what we do...grow up, grow forward, grow better, grow stronger. It's all worth it. 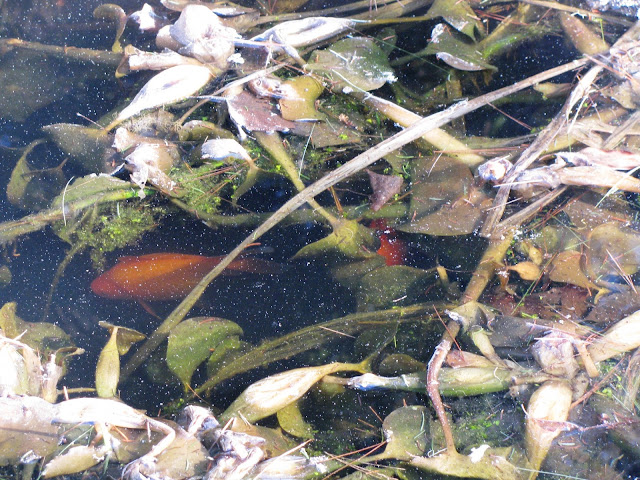 Orange Julius aka OJ, has made it through the winter freeze, as has his buddy or buddling! He arrived along with his sweetie, HOTLIPS, from A friend's pond that was being dismantled . Sadly, Hotlips didn't survive the move. OJ has become a king in the pond world here..measuring about four inches or more. Growing from a tiny goldfish, he rules a new kingdom. Ice may cover his pondland, but below..he is the Prime Minister. 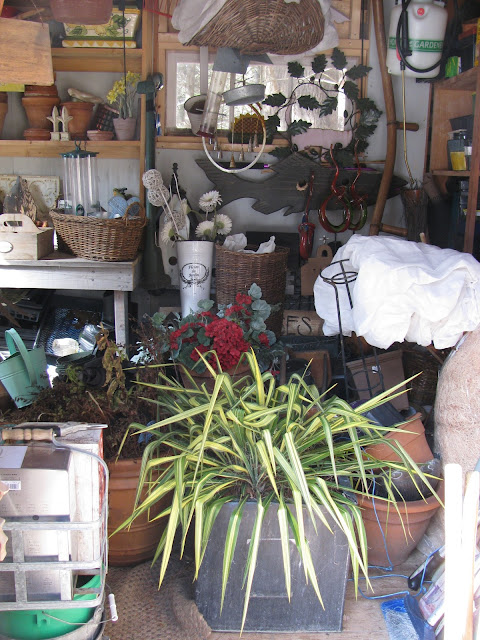 The variegated Yucca doesn't look too bad for a plant stuck in the back shed over the winter with all the other wintered garden stuff and mess! Come on girl...perk up!! I see you have babies. Yes Ms. Vic..your name is on one of them!

Snow is melting..more seeds are planted in the cold frames. What a difference a month has made. Look back..incredible the snow melt. 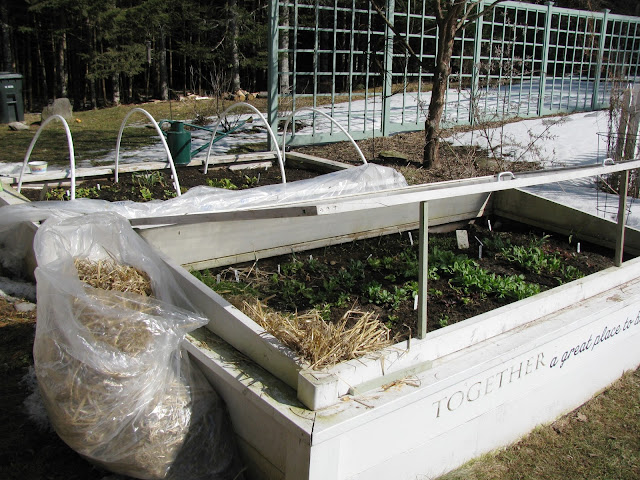 Here is my list, scattered or seeded in rows today:

The spinach mentioned in my last blog post, has germinated. Also, Purple Mizuna seeded last November 24th and forgotten about.. has germinated. "What are those little purple sprouts"? Well thankfully there was a marker stuck in the soil. How did we live without a raised bed all those years before, I ask you!!