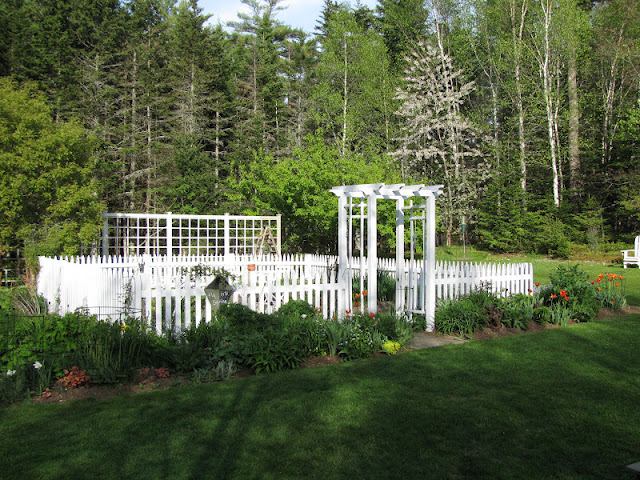 A week away, visiting family in Cape Breton, resulted in my return home, exhausted, a bit overwhelmed but oh so happy to be back! First thing I heard stepping out of the car was "Welcome to Paradise"..and indeed that was exactly what it was. In one week, the garden plants had grown a foot; all the trees were either in leaf or bloom, and as I walked about inspecting, soft laments were muttered about the amount of greens, and "we can't keep up" followed by the joys ..."asparagus are delicious and we've been eating them most nights"...and "wait till you taste them" ....  Sigh. So good to be home.

I had my stories to tell as well..."saw a black bear crossing the road just outside of Whycocomagh"! Heart in my throat...where's the camera!! Thankfully, beside me on the passenger seat. Never have I seen a black bear in the wild..only a dead one shot by Uncle Clifford triumphantly strapped to the roof of his vehicle, well over thirty years ago. Even now, these long years later, I remember my sadness as a child, touching it's fur, admiring the beauty. It is rare to see a black bear near civilization now.

The Captain did a great job taking care of tomatoes. Almost fully hardened off, they should be in the ground this coming weekend. Yes, too many..always too many. I need a few acres...not just a 30 by 40 foot plot. 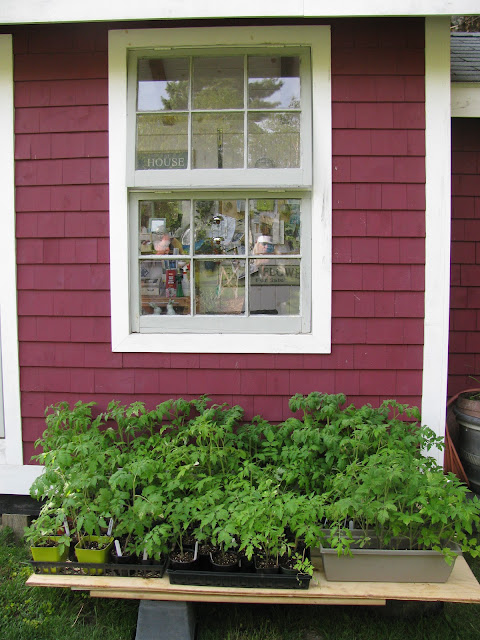 The raised beds are lush, ...lettuce, garlic, broad beans, red mustard, spinach, and then there are the cuke's in pots hardening off, nasturtium in the planter, mint and strawberries in the back. Removed the red mustard today and about to plant????.... 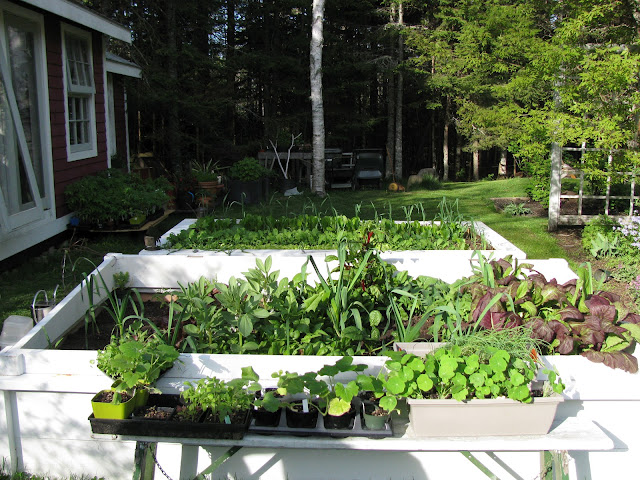 So much abundance. The hummingbirds are back, and the crows clatter..always with us...thankfully. This reminds me of a little 'time out' when I visited Cape Breton. An artist, Katherine Scott, hand cut a most wonderful monumental piece of art on Black Bee Charcoal Paper eleven feet by fourteen...reminding me of old black Victorian silhouettes but to accomplish such beautiful papercut art of this size...I was mesmorized. "Murder in the North End" she named it. I had to laugh out loud while my eyes rested on each individual bird, my mouth hung open in delight. Visit Cape Breton Centre of Craft and design for further info. 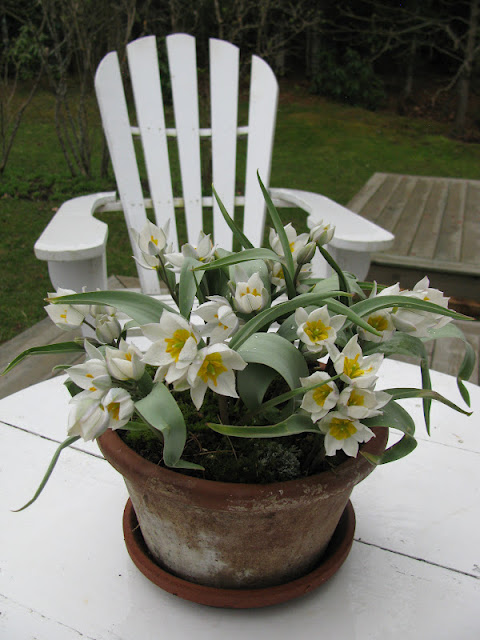 Forget what I wrote about sprinkling dried chilli pepper flakes on the ground to deter squirrels and chipmunks from digging up your tulips!! I won't say it doesn't work at all, but the species tulips have no hope of survival in our garden. The hot and spicy bed containing Tulipa biflora (Polychroma) was severely excavated by the critter crew, so those I could salvage, were re-potted and placed where they give more pleasure, at eye level. Until then, I had no idea they smelled so fantastic, so sweet and so powerful, especially for such a small flower. 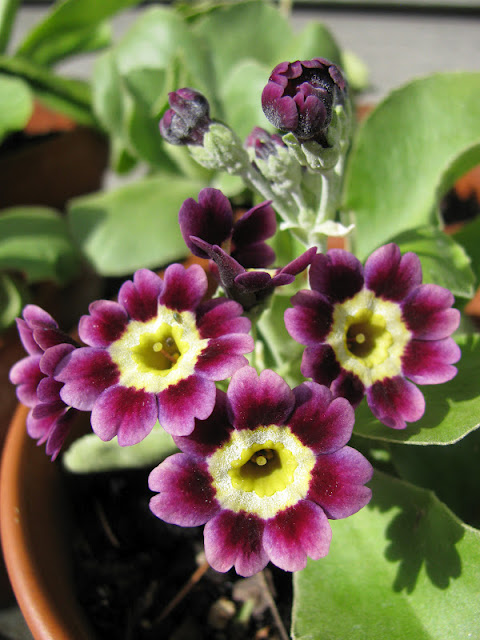 Other blooms I am enjoying at eye level, are my Auriculas. They never do well for me outside in the ground, so remain potted up year round, struggling through the winter months. But now is their time to shine and this lovely lady, for surely it is a lady in such beautiful attire, brings a smile to my face. There are four small pots all just beginning to bloom, but I remember the first time I ever saw these flowers....the display staged at the RHS Chelsea Flower Show in England. Right then and there, I was smitten. Never mind that they don't do well for me, and it is rare to see them in the shops here locally (mine came from another gardener), but for their dainty flounce and flash, I love them. 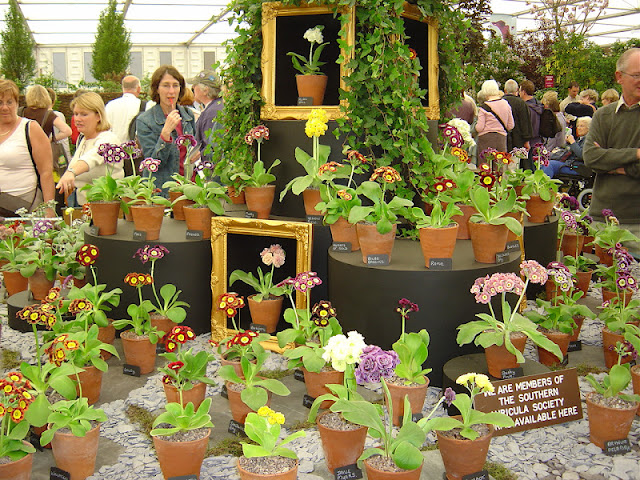 Some fanciers make their own "Theatre" for the flowers, arranged in frames, usually with a black background and at eye level which I think would be wonderful to enjoy outside near an entry. There are lots of images online showing Auricula Theatres different folks have built, from grand to modest so perhaps someday I might give it a go...if I could accumulate a few more plants to make an impact.

Speaking of making an impact, the garden has been alive not only with squirrels but masses of birds..American Gold Finches most especially making an impact with their bright yellow plumage. But I was taken quite by surprise on April 26th, when I saw a spot of blue on the ground under the feeder...blue blue, so blue I couldn't imagine it was a bird. Not for the first time, have I blessed my point and shoot Canon PowerShot camera with it's terrific zoom lens. I have identified more birds from taking photos of them, than my eyes pressed against binoculars, could ever have. For example, there is no way I would have noticed yesterday, the bit of yellow on the Yellow-Bellied Sapsucker's chest if I hadn't taken a photo, and so was able to identify it. But I digress... the blue bird, a rare sighting of a male Indigo Bunting perched on the old plum tree. 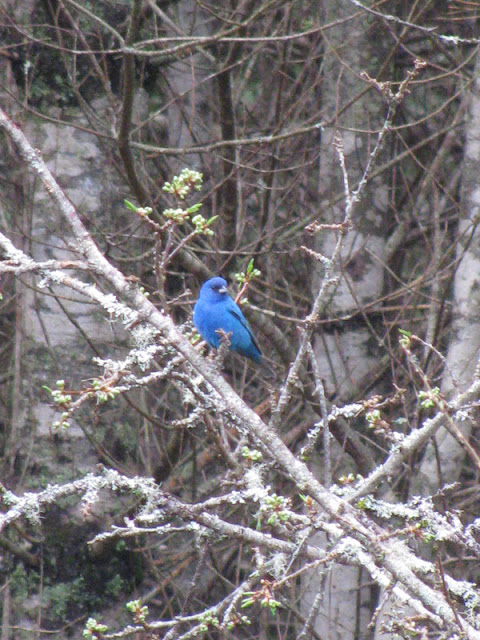 I have never seen an Indigo Bunting, ever ever so you can well imagine my heart pounding! He stayed just the one day and so far, I haven't seen him back.

And...an even rarer sight, unless someone out there can identify this bird below, (photo a tiny bit blurred) we believe it to be a Red-Breasted Nuthatch, which has somehow been born with a very long beak. What do you think? 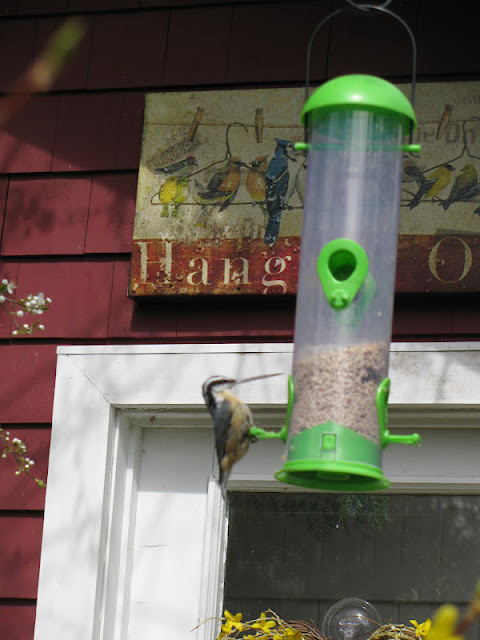 This little bird comes regularly to the feeder so I hope to get a better photo soon. A birder much more knowledgeable than I believes it is an aberrant or mutated nuthatch.

The pickets are mostly stained now, the greens and vibrant tulips pop against the fresh white. It's a busy time of year, that's for sure, but at least now, I can safely say, we have flown into spring and more wonderful days are ahead. 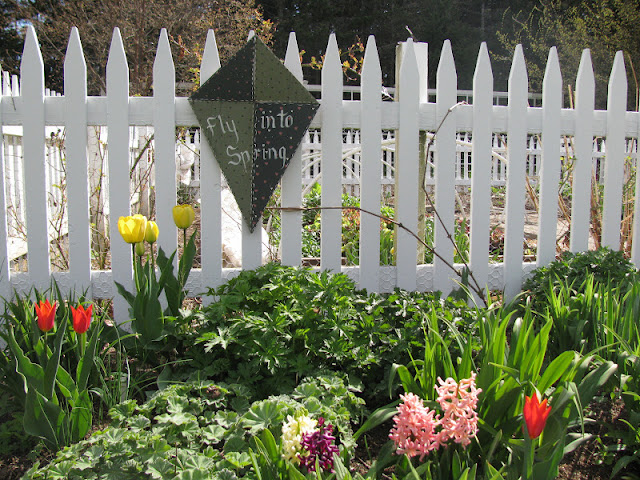