Garden Catch UP and a Thankyou to Cobble Hill Farm

Yesterday started off with the Captain arriving home from the post carrying a beautifully scented box! I knew who it was from immediately...Staci at Cobble Hill Farm in Rock City NY. You see, she had a blog give away and Big Allie chose my name. I never win anything so you could have knocked me over when I saw Gardeningbren first winner. Staci, thank you so very much. The product is wonderful and the smell divine (lips smelling of Lime Margarita balm as I type)))) and even after two hours still soft and supple. Can't wait to use the soaps. Good luck on this new venture although I don't think it is about luck but hard work and great marketing. Your product will sell itself because of its quality as it did at your recent craft show. Bravo and sincerely, Thank you!

Scent is a wonderful gift isn't it, even the damp and rotting vegetation in the garden this time of year. Today, with the rain pouring down, there is a scent reminder to make sure clean up is done before the snow arrives. Generally we don't tidy too much in autumn, trying to leave seeds for birds on as many plants possible, but I found we had a rodent highway running from the woodland along the perennial bed under the picket fence into the hoop frame inside the garden. Here is where Mr. or Mrs. thought they were going to enjoy snacking through the winter, enjoying a warm protective environment. Note the special groceries not yet brought inside. 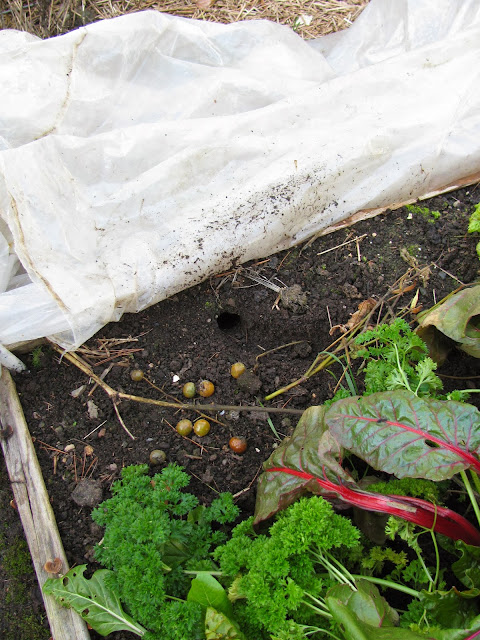 Because of this, much was cleared and while we were at it, bulbs were planted out for spring. More Orange Emperor Tulips!! I am very partial to Ballerina as they smell of oranges but was not able to get any this year. Scent again...so much a part of a garden, memory and life. The Baptisia Australis can't take the cold nights and we have had a few frosts so it was cut down. Doesn't the garden seem bare now. 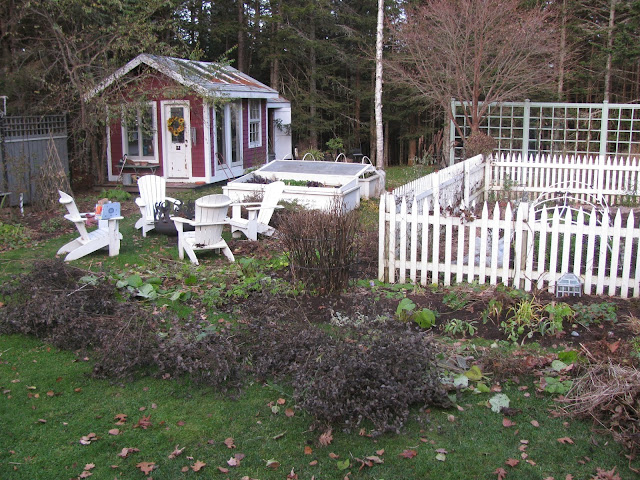 Meanwhile in the raised beds most of the beets have been removed, but will leave some for early greens in the spring. 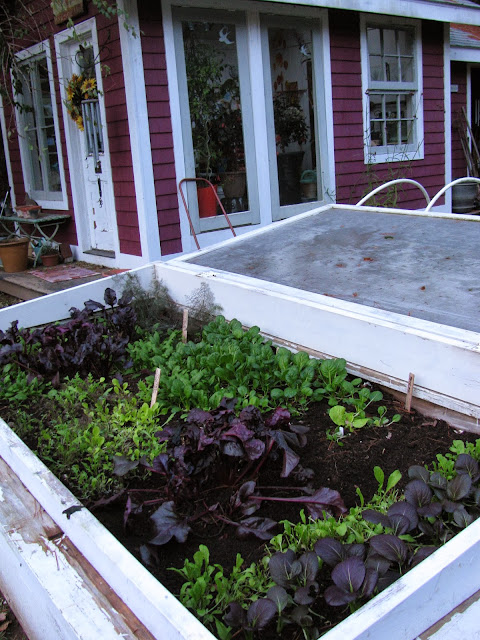 Pak Choi Rubi in the foreground has done very well and also the Tatsoi middle back. I planted the latter too early I think as it is ready now and looks outstanding. Asian meal tonight! In this bed you might notice the arugula has been trimmed, and Speedy Veg Winter greens variety are ready to snip for salads. 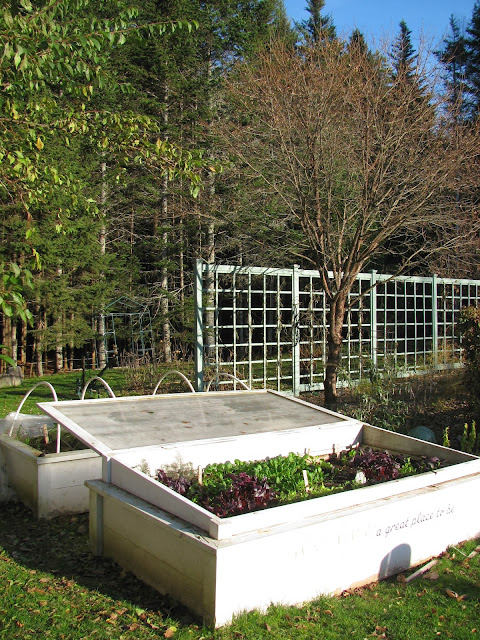 We are pleased about the winter squash/pumpkins. If I had a farm, or a huge field, I would grow more. There are tons of varieties! One I love is Long Island Cheese. I baulked at the nine dollar price on the one bought at the local market last year but surely if one seed produced a pumpkin that cost nine dollars...and that pumpkin produced a hundred seeds, and that seed produced a plant that fruited two pumpkins...then surely a thousand dollars is to be had if only, I had a field!!
The summerhouse holds a few tomato plants that are still producing and 'the Stink' our spaniel, enjoys having a Mexico Midget when they ripen, but he misses his green beans that is for sure. The pole beans are blackened and almost all pulled up but he still walks to the wall expectantly..surely there is one bean left on the trellis he says with his brown spaniel eyes.  My reply...next year buddy...I'll grow extra for you and more Mexico Midgets too!
Posted by Gardeningbren at 9:10 PM 15 comments: 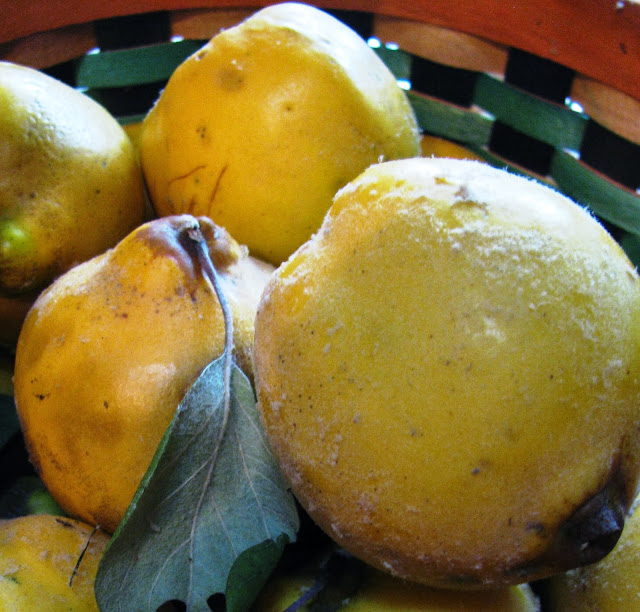 It's quince time again, the fruit filling the kitchen with it's wonderful, incredible aroma. "Oh For a Quince Tree" I wrote last year... yet still have not planted one. Autumn is when I lament this fact, but blessed to have friends like Naomi and Pete who live in the Annapolis Valley in Nova Scotia and share from their one tree. You can see on the blog link above how the fruit glows from N & P's dining room window. Why this tree is rarely available and little grown on Canada's east coast is beyond me. Most of Canada's early settlers knew the rich pectin and flavour made jelly and jams set. I found out by mistake, much pectin is in the seeds so don't cut the core out if you want 'the jell effect'. Tangled Garden in Wolfville, has three Quince trees on the property so I would suggest late October to early November the best time to see the fine specimens glowing in autumn's low light. There is a nominal fee to enter the garden; don't miss stocking up on jelly for the coming holidays.

My favourite recipe for using quince is the one mentioned in the blog post last year, because from that point, put in jars, the fruit is ready for anything including cake making and sauces not to mention using hunks of it on bread or pancakes. Basically the recipe advises roasting individual quince in foil, lined up like soldiers until you can just get a fork in. Peel and cut up the next day (leaving the core as its done it's job) if you are fed up with quince by then which I usually am! Then pour over a simple syrup with orange juice and slivered peel baking to a 'treacly state' so says Sarah Raven in her book...Sarah Raven's Garden Cookbook. (There is a Canajan version re measurements.)

So here's my lot roasted and cut up the next day ready to go into the oven with the syrup mixed in. I know, it doesn't look that appetising. I added six cloves as well. 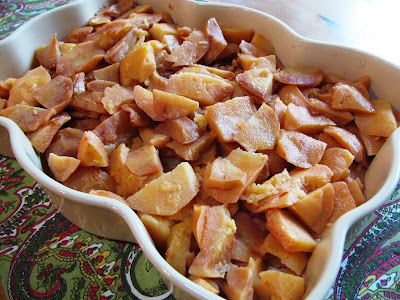 Then it was on to the baking and this is what came out about forty minutes later and just to say this is an untouched photo. It really does go this wonderful color...sticky and "treacly" as the chef and gardener states. 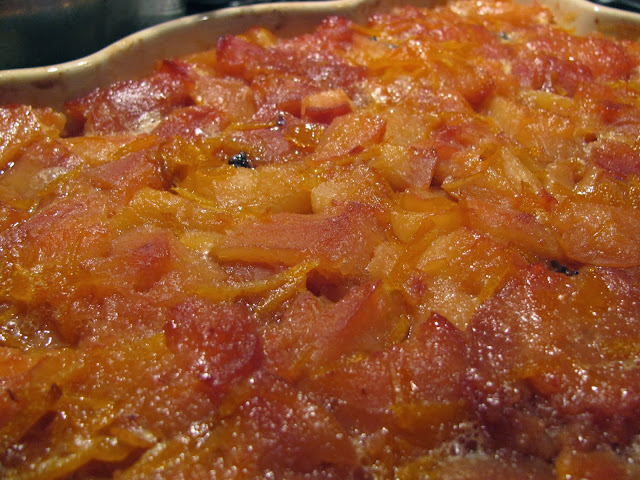 After that, it was into the Kilner jars. I also use jars that can be boiling water processed and others that are commercial jars and have the rubber inside the lid and don't have to be processed as long as there is keen attention to temperature and sanitation. These work great if you can find them at a local 'container/packaging' company. Mine was Richards in Dartmouth, Nova Scotia. 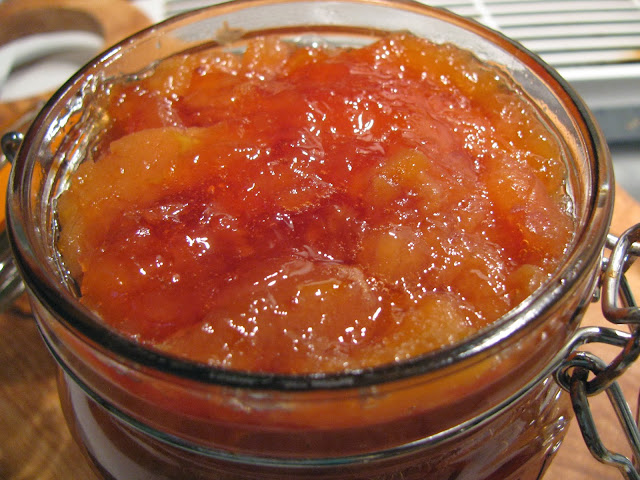 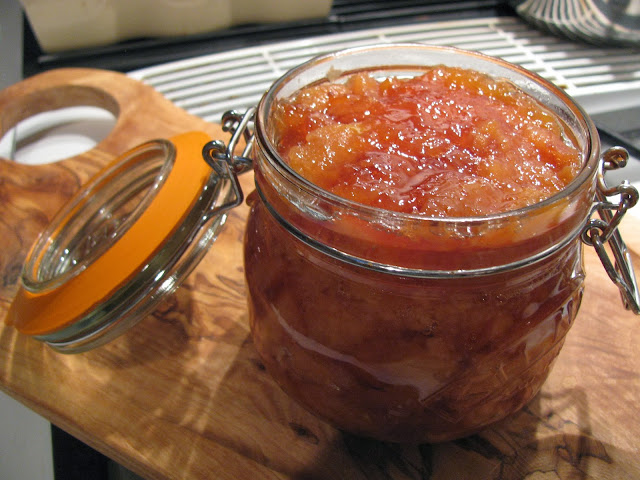 Yes, it tastes as good as it looks!